Nowadays, it seems you can find almost any model of electric bike. From fat tire ebikes to mountain bike ebikes, there are endless of choices. The one main thing to keep in mind is what you plan to use your electric bike for. If you plan to go off-roading, then a fat-tire bike is more for you. But if want to go for leisure rides through the city, an electric city cycle is the way to go.

What are Electric City Cycles?

Our Cruiser step-through electric bike is considered a “city bike” for a number of reasons. The main reason being the size of its tires. The Cruiser eBike has thinner tires than what you are used to seeing. This is because it is meant for riding on bike paths, in cities (on sidewalks), or casually on any type of paved surface. Thinner tires mean an electric city cycle won’t be good for any type of gravel or dirt paths. 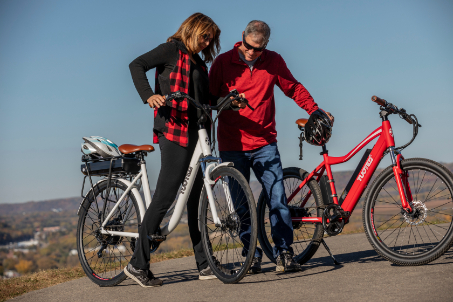 Why is it a “Step-Through” Bike?

The Cruiser (and many other city bikes) have a what is called a “step-through frame.” This type of frame is just what it says it is. It allows any type of rider to easily step-through the frame to get onto the bike. You won’t have to worry about struggling to lift your leg over the frame to get situated onto the bike. An electric city cycle such as the Cruiser also allows you to stand with your bike between your legs. This can be done because of its type of frame.

Why Use the Cruiser?

An electric city cycle such as the Cruiser is perfect for the type of person who likes to take a casual bike ride. Whether that be through a city, along a bike path, or on a boardwalk next to the ocean. We quite like cruising through Red Wing where we are located in Minnesota! If you are a first-time electric bike buyer, the Cruiser is a great bike to start out with.