If you haven’t heard of a folding electric bike by now, it’s time we make you aware of them. With tons of different style ebikes out there, you might get overwhelmed and not know what model is best for you. Don’t worry, we’ve all been there. That’s why we are here to make sure you know all the benefits of a folding ebike. Or what it even is, for that matter.

What is a Folding Electric Bike?

A folding ebike is exactly what it sounds like it is! It looks and functions just like any other bike but has the ability to fold up into under half it’s size. What’s even better is that it is extremely easy to fold it up without having help from another person. There are typically two latches on the bike. One is near your seat and the other near your handlebars. When folding an ebike, you will want to fold down the handlebars first, and then fold the bike in half. 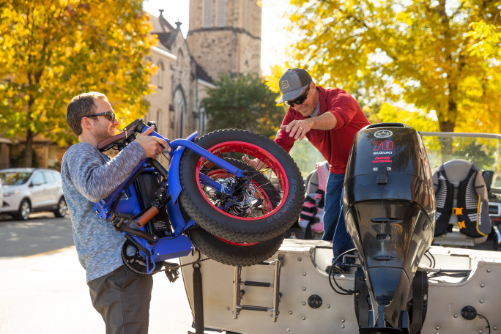 Why Would I Want One?

There are many reasons why folding bikes are becoming extremely popular nowadays, and it all has to do with saving on space. If you live in the cities in an apartment, owning a folding bike allows you to store it in a small space such as a closet. We’ve seen a lot of passionate campers also want a folding bike. This is because they can save on room in their cars or RVs when traveling. It folds up small enough to store out of the way. And who knows—you might not even have to worry about a bike rack!

Where Are The Best Places To Use One?

Our TUOTEG Convert folding ebike has fat-tires. This means you can ride it on multiple types of terrain. From paved paths in a neighborhood or in the cities to rough and gravel paths. Fat tires provide comfort and control as you ride!